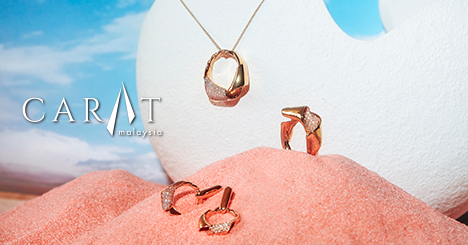 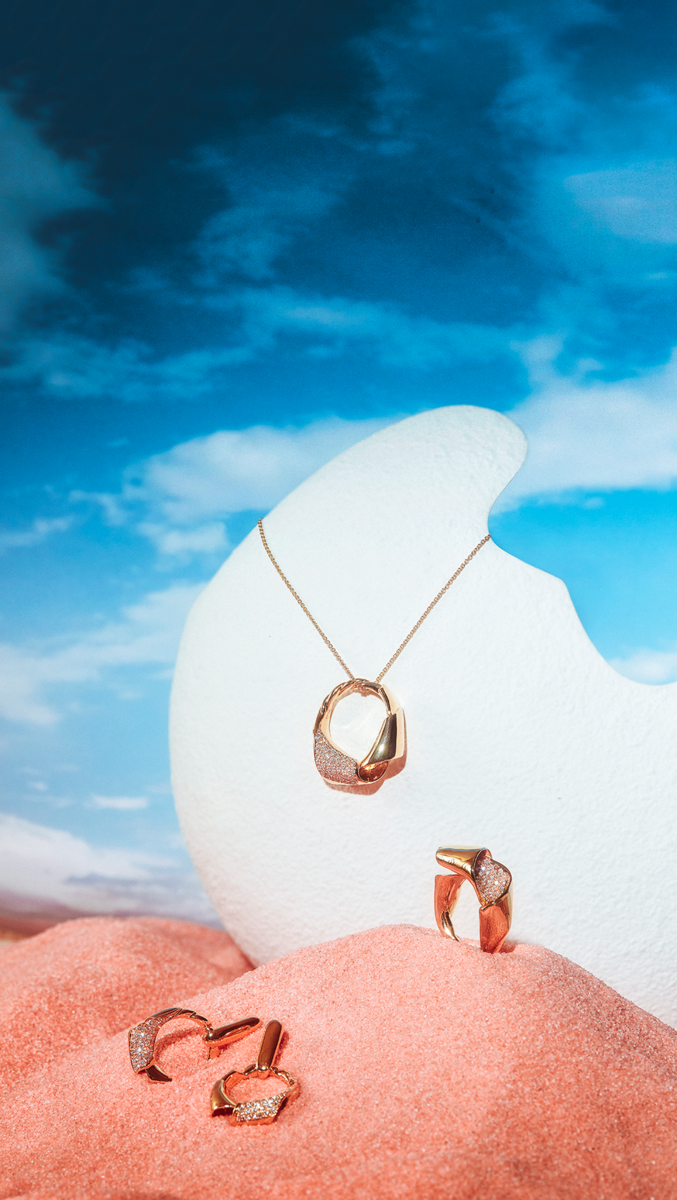 In the Maar Ring, pavé set diamonds sparkle from the interior curve of the ring rather than on the exterior, designed to give subtle elegance in a gently revealing form. With so many customisable options, the Maar Collection has endless possibilities, from an every-day ring offering understated opulence, to show-stopping earrings for a glamorous event.

The Maar collection of 18-carat gold rings, earrings, and necklaces also channels designer, Yasmin Tjoeng’s, multicultural upbringing. With Chinese and European heritage, Yasmin was raised in Australia and the Pacific Islands, and after time spent in Beijing and Hong Kong, has been based in Singapore since 2013. Her unique jewellery pays homage to the cultures of her childhood, from the ornate and fantastical designs found in Papua New Guinea and China to a more understated Australian aesthetic. Her designs draw inspiration from the nature, art, folklore and legends of this rich background, while the vibrant, colourful style of many of her pieces reflects the cosmopolitan city she now calls home.

Singapore-based fine jewellery brand, Maison Tjoeng, unveils its new Maar Collection this June, showcasing a bold embrace of femininity that dares to be different. Founded in 2016, Maison Tjoeng has garnered a cult following for its bold, vibrant designs that take inspiration from art, nature, and mythology, as well as the founder’s own multicultural background. These tenets shine through in the new collection, with a range of signature pieces that redefine what it means to be a modern woman.

Channelling artistic inspiration, the new collection takes its name from the 20th century surrealist artist, Dora Maar, known both as an artist in her own right and as Pablo Picasso’s long-time muse. Remembered for constant experimentation and innovation across different mediums, Maar’s provocative photomontages and abstract landscape paintings broke the mould.

It was exactly this spirit and rejection of the status quo which inspired Yasmin to freely experiment with wax, as opposed to pre-design pieces, to achieve a sensual and organic aesthetic in her new summer collection. Asymmetrical in its form, it is both undulating and bold, with each piece revealing itself from different angles. 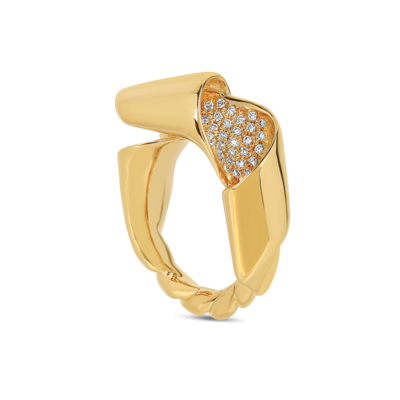 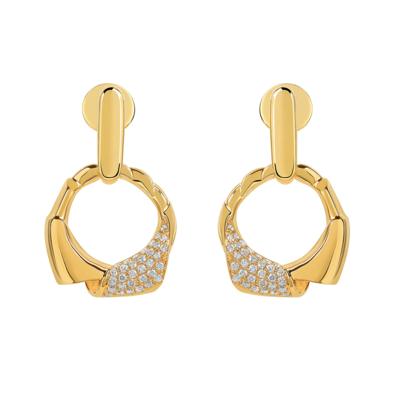 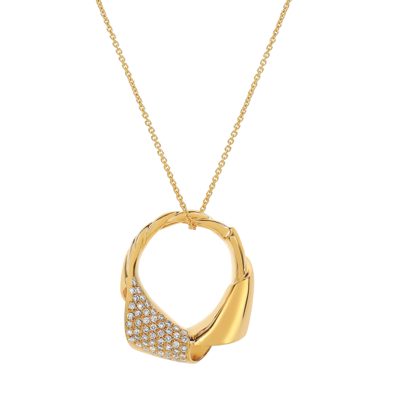 With Yasmin handling every part of the supply chain, Maison Tjoeng retains ownership of its production, from conception to purchase. All of the diamonds used by Maison Tjoeng are processed in Antwerp, Belgium, and are aligned with the Kimberley Process Certification Scheme which works only with non-conflict diamonds, meaning customers of Maison Tjoeng can relax knowing their product choices are both socially and environmentally conscious. When it comes to gems and other precious materials’ sources, Yasmin exclusively works with like-minded and trustworthy suppliers for precious metals, who focus on remedying the issues in the luxury jewellery sector with responsible sourcing and transparency.

Maison Tjoeng’s community is elegant in fashion and lifestyle; the choices they make about what they wear reflect a commitment to sustainability, social responsibility, and supporting local artisans. The artisanal brand honours its community by holding itself to the highest industry standards, seeking out top quality materials and suppliers to ensure authenticity and integrity every step of the way. Each piece of jewellery is hand-finished with traditional methods, honouring the tradition of artisanal craftsmanship that drew Yasmin to jewellery design in the first place. “I really believe in supporting the craft of jewellery,” says Yasmin. “All of my designs are either handcrafted or hand-finished.” 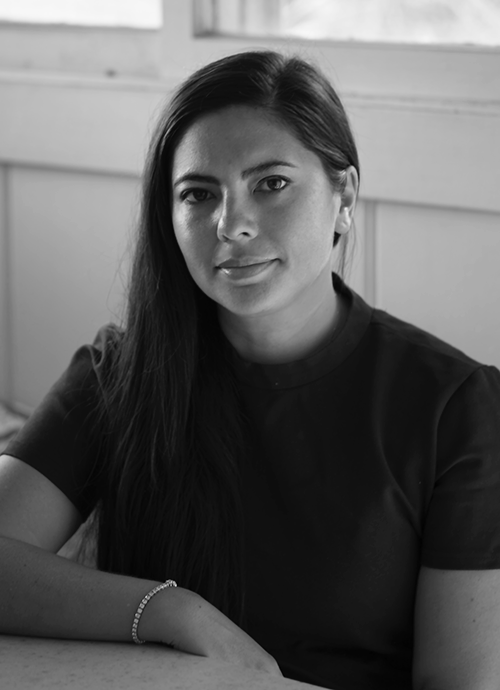 Yasmin Tjoeng is a Singapore-based jeweller and designer and the founder of independent fine jewellery brand, Maison Tjoeng. Born in Australia and raised in the Pacific, Yasmin takes her inspiration from colourful cultures and artists from around the world to bring a contemporary flair to her craftsmanship.

Following a degree in Architectural Interior Design at Bond University, Yasmin started her career working in wholesale semi-precious stones in Australia. In 2008, she moved to Beijing to study Chinese and then onto Hong Kong in 2009.

In 2013, Yasmin moved to Singapore where she studied Jewellery Design at the Raffles Design Institute. Here she immersed herself in the art of silversmithing, gemstone setting and traditional jewellery making techniques, whilst doing an internship with local brand, Perlota.

Yasmin then launched artisanal fine jewellery brand, Maison Tjoeng, in 2016, which quickly garnered global recognition within the jewellery world for it’s unique collections. It was listed as a recommended brand in 2016 at the Premiere Classe in Paris and Yasmin was made an Ambassador to the Metal and Smith show in New York in 2018. In 2019, Maison Tjoeng was accepted into the Couture Design Atelier, the most prestigious show for independent fine jewellery designers. This international exposure led to a collaboration with a renowned jewellery brand in China, due to be released in 2020.

Each piece at Maison Tjoeng is hand finished with traditional methods, fostering the craft of jewellery that Yasmin is so passionate about. “All my designs are either hand crafted or hand finished, and feature a combination of silver or gold with precious and semi-precious gems,” says Yasmin. “I especially love coloured precious stones such as emeralds, sapphires and azurite, and they feature heavily in my first collection. I also like to use more unusual stones like malachite and marble, which you don’t see used in fine jewellery.”